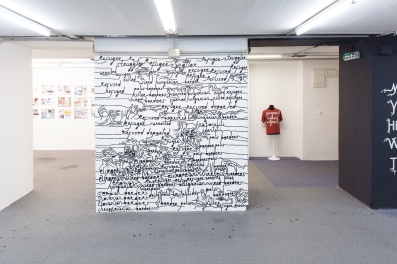 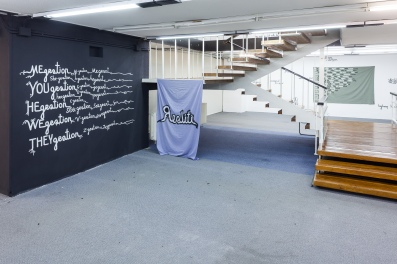 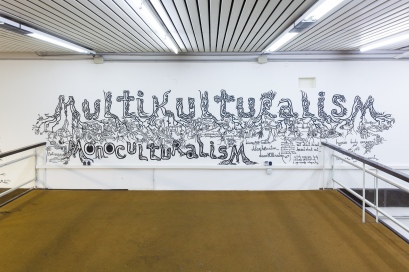 The first solo exhibition of Azerbaijani artist Babi Badalov is going to, at least for a moment, bestow the Croatian exhibition matrix oriented mostly towards local or Western art production, with a note of multiculturalism which has been the norm of European programations for quite some time. Although Badalov’s multidisciplinary artistic practice focuses on performance, installations and painting, for the exhibition in Rijeka Nemanja Cvijanović has selected the most distinctive segment of the artist’s oeuvre: the word-based compositions, which are specific in terms of space, content and form and which have earned artist the status of one the most prominent visual poets of today. It is truly interesting and revealing to observe Badalov’s works in the context of visual poetry on the Croatian art scene. Badalov’s practice is most similar to that of the artists of the generation that chronologically precedes him, such as Vlado Martek, Mladen Stilinović or Momčilo Golub. One of the things he has in common with these artists, is, among else, his tendency to engage in semantic and phonetic wordplay, and especiallyflirtation with the English language, through which the contemporary social and cultural phenomena define themselves globally. From the perspective of social criticism, Badalov and the Croatian artists share the same inclination for provoking the positions of power within cultural and political systems, but their similarity also lies in the depth of the intuitive, poetic observation of elementary facts of life. Yet, what distinguishes Badalov from our, almost-Western oriented artists, is his exceptional sense for the pictorial aspect of the work. I would place it in the tradition of the intricate decorativeness with which the culture of Islam, the culture of Badalov’s origin, replaced the proscribed figurative depiction, developing not only rich diversity of ornamentation but also cartouches as forms of written paintings. While our artists usually write words with a stiff, almost childish handwriting and a neutral font, Badalov’s words, written in a continuous line, flow rhythmically. The ends of his letters branch off into flickering tails, which grow thinner the more they spread, before they finally penetrate and grow their roots on the painting’s surface. Under these words, which almost come to life, Badalov creates deep shadows using a pigment wash. As a result, words, spreading on the plain surface, become three-dimensional, monumental, palpable, just like material fact; they become alive and concrete, like some sort of mountains depecting cultural landscape. And, while our artists exhibit their works mostly in the traditional way, in galleries, in rows or grids, Badalov mixes his culturally specific works into spatially specific compositions, in an ever-changing patchwork, which seems to resonate with a flutter of tents erected in an improvised migrant camp. With this we have touched the very core of the difference. Unlike our artists, who are firmly rooted in the domestic ground and the corresponding discourse of a cultural margine, Badalov lives the life of a contemporary wanderer, a migrant, who has replaced native soil with his spiritual homelands – cultural metropoles of the world. Badalov enrichs them with intense images of living on the social margin, and personal feelings of permanent uncertainty and incomplete belonging. This is the position of the other, the position from which one does not have much influence, but which nevertheless offers a good view on the state of affairs. Badalov’s oeuvre rests on the experience of nomadism caused by not fitting in with the world-view of his native Azerbaijan province. And in this particular moment, Badalov’s work illustrates the effects of the painful migrant drama, which has grown to epic proportions and which confronted the seemingly stabile West with the issue of borders of all kinds – from political and moral to those of linguistics, which Badalov often uses as his mode of expression.

Babi Badalov gladly defines himself as a multicultural project. Therefore, he is inclined, with equal intensity, to find his inspiration both in the traditional heritage of his native land and in the classic, modern and popular culture of Europe which he fatally experienced in the filtered context of the former Soviet Union. In the context of today, his work vividly shows us how much novelty and variety migrations bring to the rigid flesh of our culture. We are faced with just one dilemma: to accept or not.